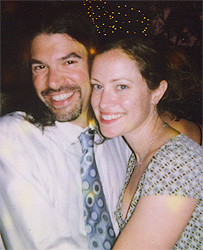 We used to live right next to Tank Hill (story | pic), but in 2003, we moved to a slightly bigger apartment just up the hill from the Castro, sometimes referred to as Upper Market.

The little red circle on this map of San Francisco shows approximately where we are located: Want to see a cooler map of the City? Check out the San Francisco Bike Coalition's Walking and Biking .pdf map.

We're probably going to move to Alemeda in January 2010. Once we get settled, we'll update this page.